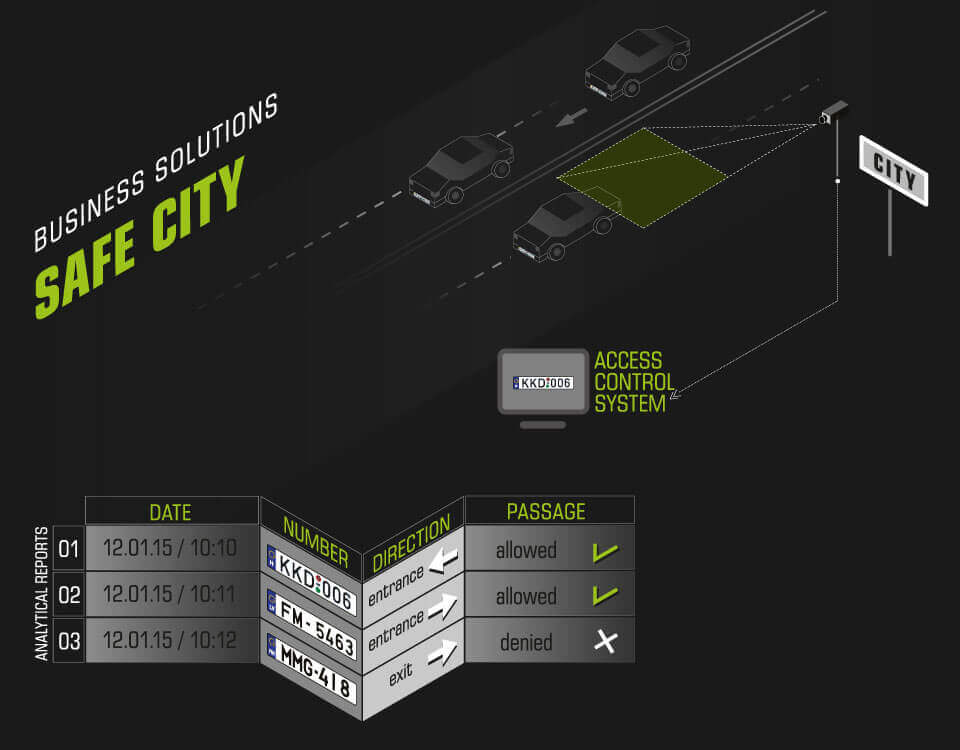 Traffic monitoring system NumberOK allows you to detect vehicle plate numbers, make, model, type, color and direction of vehicle movement at speeds up to 240 km / h, compare them with the database of stolen cars and send signal to the control panel of the police department when findes matches. NumberOK receives information from cameras installed at the entrance and exit of the city.

In real time, the automatically recognized vehicle plate number is compared with the police database of stolen cars. If the license plate is found in the database, NumberOK issues an alarm signal to the police attendant console.

Mobile monitoring of city roads in real time has been developed for road patrol services. IP camera and NUC mini computer with the downloaded database of stolen cars is been installed on the windshield of car. When the patrol car moves, the camera recognizes vehicle plate number and when a number is found from the list of stolen cars, it sends an alarm signal to the police.

Video surveillance at checkpoints and major intersections of the city's roads. Providing objective and up-to-date information about the presence of stolen and being on wanted list cars in the city. The ability to track on the interactive map the traffic route of the offender to organize his detention. Traffic rules control.

Solution and logic of work

The system checks the recognized numbers of cars with a database of stolen cars. If there are coincidences, it signals to the control panel of the police department. NumberOK determines the following types of traffic violations: red-light running, driving on the public transport lane and speeding.